Opportunity Or Obstacle? The Choice Is Yours 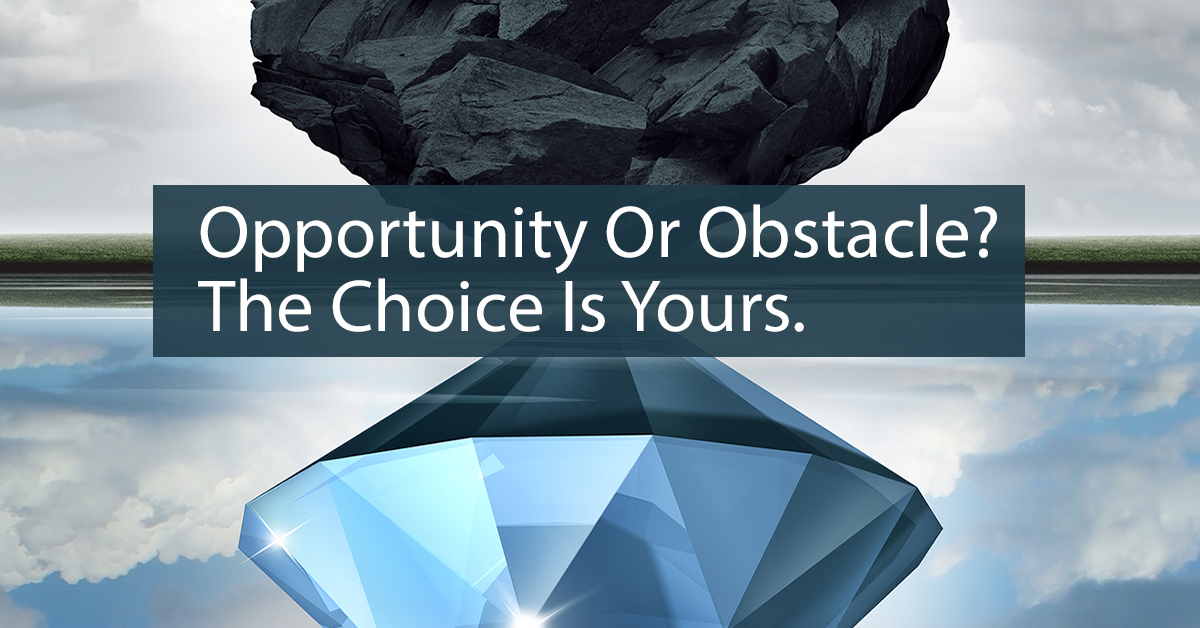 It’s funny that sometimes we’re so focused on what we think is important, that we miss opportunities that present themselves to us.

And the fact is, that in almost every case of facing some kind of challenge or adversity, how we choose to respond can make us either weaker or stronger individuals.

I was reading about Brent Gehring, the Nebraskan father of six-year-old Emma, who has suffered almost her whole life with a form of brain cancer.

Gehring went public on Facebook, relating his experience last week when leaving a Boston restaurant. Because his daughter is unable to walk due to her condition, Brent carries his daughter wherever she needs to be, unless she uses her walker.

As he was crossing the road while carrying his daughter, a man yelled at him, “What the F*+k? Make her walk. That’s what is wrong with kids today.”

What’s really interesting is how Brent describes the options he had for responding to this stranger.

“I had a choice to make at that time. Can I make myself feel better by screaming at him or can I teach him something about life? I won’t lie to you and tell you that it was an easy choice but I got inches from his face, with my daughter in my arms, and quietly asked him if he was referring to my daughter. ‘Hell yes’ he said.

“I responded with ‘My daughter has been carrying my faith and my strength for the past 5 years since she was diagnosed with a brain tumor. She can’t walk but I am happy to carry her because of all the amazing things she has taught me through the years. So I would advise you not address my daughter in any way other than respectful’.”

Brent had two options for how he responded. He could have cussed out the guy for being an ignorant fool who was running his mouth off. But instead, he chose the path of educating the guy, and making the world just a little bit better in the process.

As Brent explained, “I won’t tell you the rest of the story but it ended with two grown men with tears rolling down their faces. One that needed to have his eyes opened to what real life and real love is and one that is always needing a reminder that good can come from any situation.”

It brought a tear to my eye too, when I read it.

Because Brent was able to keep a cool head, instead of just reacting emotionally, he took a much better path.

Instead of seeing one more obstacle in the way of his daughter living a normal life, he saw an opportunity to actually make things better.

If he’d cussed out the stranger, do you think it would have had the same profound effect? Me neither.

Which brings me to my other example.

Now, I know many exhibitors who, facing similar circumstances at other events, would respond in a couple of ways.

There are lazy exhibitors who will spend the entire duration of an event behind the table at their booth. They wait for the attendees to show up. If nobody shows, they have a very quiet show.

The other way some exhibitors would respond is raise hell with the event organizers, complaining that they’re not getting what they paid for.

Well folks, I’ve learned over the years, that doing either of those two options will not get you the result that you want, which is more business.

We didn’t get the traffic we wanted, so I went out and found it. I had a lot of success networking at the events and parties around the conference.

In fact, because the parties and events were informal, I was able to talk to people in a much more relaxed setting. I was able to offer more of my time to talk about how they can solve their problems. I couldn’t have done that if I had a steady stream of people approaching our booth throughout the event.

That meant I could really pick and choose who I spoke to, while still making myself completely available and approachable.

The result was that we have several new members signing up to PILMMA.

And all because I looked for the opportunity instead of the obstacle.

Nobody would fault Brent Gehring if he had lost his cool with that foolish stranger. However, instead, he took stock of the situation, remained calm, and chose a better path. He found the opportunity he wouldn’t have noticed if he’d been hot-tempered about it.

And that’s true for my experience at AAJ. There are always things that don’t go according to plan, and there’s always something unforeseen at a big event. Mine are no exception.

The question is, when a challenge hits you, can you keep a calm and level head, and find the opportunity that’s waiting to be found? Or do you only see the obstacles?

If Brent Gehring can be the wiser person when somebody is yelling at him about how he looks after his daughter, surely you can also be the wiser person in the face of adversity. Identify the opportunity, seize it with both hands and then exploit it to the maximum.