2019: Sean Olson, No Longer A Prisoner Of His Own Law Firm 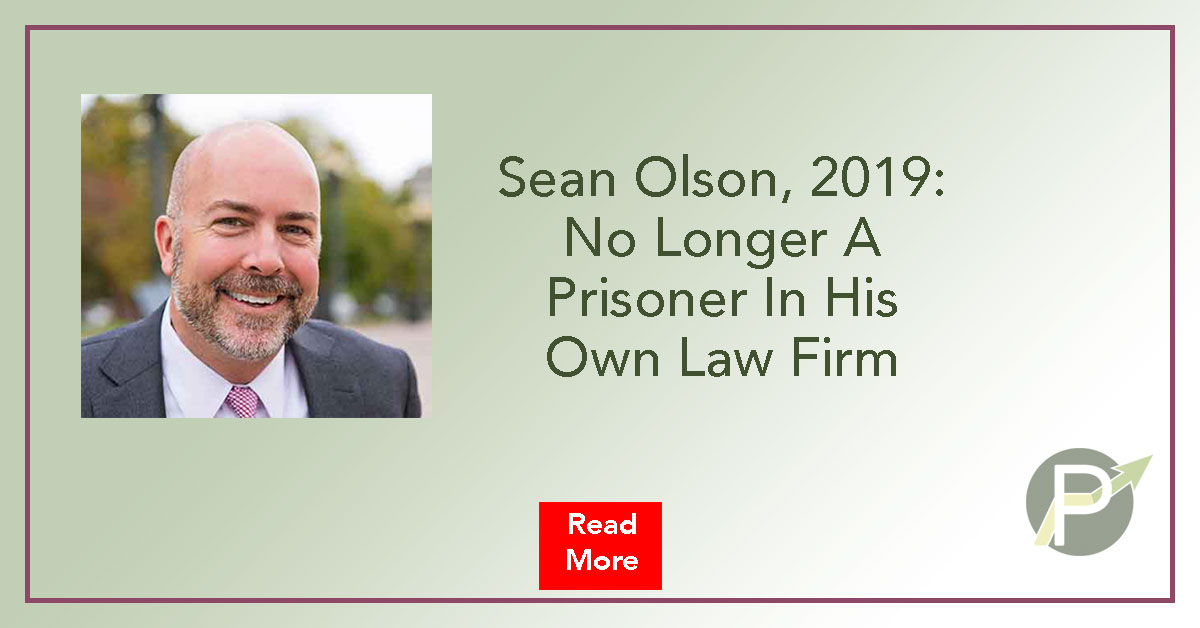 Sean Olson is starting out 2019 with a very clear plan for his Denver, CO law practice. Within two years, he’ll be taking a one-month vacation from his personal injury firm. He’s also certain that the firm will be running smoothly without him – and fund that month-long getaway with his family. However, Sean admits that when he first decided to focus on personal injury cases, he really had no plan at all.

“There was no organization to anything,” said Sean. “Everything was just done based on guesswork or a gut instinct, and that wasn’t getting me anywhere. I owned a job. I didn’t own a business. I was just killing myself.”

When Sean first joined PILMMA, around 18 months ago, he had only a dozen open cases, not all of them personal injury.

No Idea How To Grow A Business

“As a lawyer, I had no idea what tools were necessary to grow a business,” said Sean. “I’m involved here in Colorado in a couple of trial lawyer organizations, and lawyers here are happy to talk all day long about how to try a case, how to do a deposition, share information. They couldn’t be more helpful about that stuff.

“But when it comes to marketing, how to get clients and how to manage a firm, nobody ever wants to talk about anything.

“PILMMA has provided me the support and the knowledge to know how to do it,” said Sean. “I can reach the goals that I want to reach, and have a system and a plan to do it rather than just a hope and a dream someday down the road.”

Read about Sean’s existing marketing strategies that are growing his caseload each month, in our exclusive Case Study!

Over the Christmas holiday last year, Sean had a chance to reflect on what he really wanted to achieve, both for himself and his law firm. It’s the clarity that Sean found over the holiday season that sparked him to completely overhaul his plan, with more ambitious goals in mind.

During the winter break, Sean spoke with another PILMMA member, Matt Dubin, who was at the same stage of growth with his law firm a few years ago, that Sean is at right now.

At first, Matt had very modest goals for the growth of his law firm. But then he realized that he was holding back the growth by not thinking “bigger” or more ambitiously about what he could accomplish – or how he could put his law firm to work for him – instead of allowing the firm to control his life.

Where Sean is different is that he knew he wanted to grow, and joined the Mastermind group to be part of a supportive community of fellow lawyers – but only over the last few weeks has Sean really appreciated what he can achieve if he sets his mind on it.

“Taking a month-long vacation was something that I never really thought was possible. I was thinking about the firm in terms of dollars and what I need to get through to retirement, to put the kids through college, and so on. I had never stopped to think, ‘Okay, what would I really like to do? What would that look like?’

“That was a game-changer for me. That has changed my mindset.”

Sean’s decision to make that one-month vacation a reality within 24 months has shaken up his plans entirely. The law firm will need to have a sufficient caseload to support that goal, as well as robust management systems to ensure the smooth running of the firm.

“That vacation is going in on all the plans now, said Sean. If I’m going to be working this hard, running my own law firm, I’ve got have something like that.”

Hiring Help To Spread The Load

The change in Sean’s approach is plain to see. “I just don’t have enough hours in the day,” he said. “I need to get the marketing done. I need to get the business side done. And we need to practice law. Being the sole lawyer, it still falls on my shoulders to get the work done.

“And I realized that I’m not going to get it all done without help. So I’ve engaged a specialist to help me take the reigns on the marketing. That will allow me to focus more on the client experience, taking the firm in the right direction.”

Now Sean is serious about scaling the firm and looking at how to do that faster, without breaking the entire business in the process.

“The big goal is getting the firm to a place where it runs itself, without my necessarily being there. That’s going to take a lot of work, because right now, I do everything. To get there, I can’t be doing everything.

“I need help, so it makes sense to bring on partners for things where I’m not the expert, like marketing. Being able to get that help and to rely on it is going to be significant.”

What Sean now has is a deliberate and intentional approach to both getting new cases and how each case and each client is handled.

What that means in practice is that Sean is building the systems he needs to deliver those results.

Just a few weeks ago, Sean’s goal for the firm, going into 2019, was to open 3-5 new cases each month, which he’s already achieving.

Read about Sean’s existing marketing strategies that are bringing in at least 3-5 new cases each month, in our exclusive Case Study!

The difference now is profound. Sean has developed a 24-month plan, where the firm will be opening at least 10 cases a month by the end of 2020, and of course, his one-month family vacation. Then he worked backwardsto where he is right now, working out the plan to take him all the way through to achieving that two-year goal. In other words, Sean has a plan to give himself time and financial freedom.

“To some degree, the firm will have to run on its own to service that level of client numbers,” said Sean. “By projecting further out into the future, we know what we have to do now to get to where we want to be.”

Since Sean plays a crucial role himself in the follow-up and intake process, he has to figure out how to replace himself in order to achieve that systemized growth and four-week vacation. Yet, as Sean explains in our exclusive case study, his current role in the intake process is a key differentiator that he credits for signing new clients.

Find out Sean’s intake secret in our exclusive Case Study on how he’s grown his firm so far!

“What this is really all about is finding that sweet spot,” explained Sean. “It’s about finding that right balance where there’s time to do the things in life I really want to do. The things that bring us true joy. In order to get to that spot, it’s not going to happen overnight. You’ve got to have a plan and you’ve got to make it work.”

Every Day Has A Plan

It’s like a big switch was flicked in Sean’s mind, and he realized that he had to make the law firm work for him – and not the other way around – in order for that to happen. “Every day has a plan put in place to help us get through to the end, and I never had that before,” he said.

“I can’t allow the firm to run me,” Sean continued. “I have to own a business. I don’t want to own a job. In 2019, Sean Olson is finally acting like a business owner.

“It feels amazing. I don’t worry about that part of things anymore. When I know someone else has been given a task to do and I don’t have to sit around all day and worry about whether it’s getting done and getting done in a proper way, it’s an amazing feeling. It’s 200 pounds off my shoulder every single day.”

In 2017, Sean decided to find a solution that would teach him what he needed to know about signing new clients and managing a personal injury law practice.

“I never got the sense that Ken was selling me,” said Sean. “He never took the opportunity to brag about himself or his firm, or the things he had done. He said, ‘Look, go talk to some people who have worked with the group, and then come back and talk to me and we’ll see what we can do.’ So I spoke to a PILMMA member on the west coast.

“He walked me through all the different things that he had done over the last couple of years to grow his firm, and become very successful,” said Sean. “He said, ‘That’s the kind of thing that you’re going to get with PILMMA. You’re going to learn how to manage a firm, how to market your firm and take care of the business side of things that nobody ever wants to tell you about.’

“So I signed up and went to the PILMMA Super Summit, and it was like drinking out of a firehose.”

Sean found himself invigorated not just by the marketing and management strategies presented at the Super Summit; he also found a supportive community of like-minded lawyers who wanted to achieve the same success.

“It was amazing,” said Sean.  “It was that same sense of community there that I’ve got out here with the trial lawyer organization. And it was that energy, that willingness to share, that desire to see everybody succeed. I don’t know, I guess it’s hard to explain. I walked away with a million ideas.”

With his fresh plan for 2019 into 2020, and the support provided by PILMMA, its members and his involvement in one of our Mastermind Groups, Sean is on track for success.

“I know that I’m good at what I do, and that I can get the job done for those individuals,” said Sean, “But without PILMMA, without marketing and management of a firm, those people are never going to know that I’m here and ready to help them, and so it’s a necessary part of the job. So yeah, PILMMA helps. PILMMA has been instrumental in getting me to this point, and will be instrumental in getting me to the next step.

“I’m pretty confident at this point in time. I think if you associate with enough different attorneys who have done it, you realize that it’s not necessarily rocket science or brain surgery to make it happen. You just have to know what needs to be done, and then have a willingness to do it. And if you do those things, I think there’s no option but success at the end of the day.”