From Student To Teacher: Seth Price on Building a 38-Lawyer DC Firm 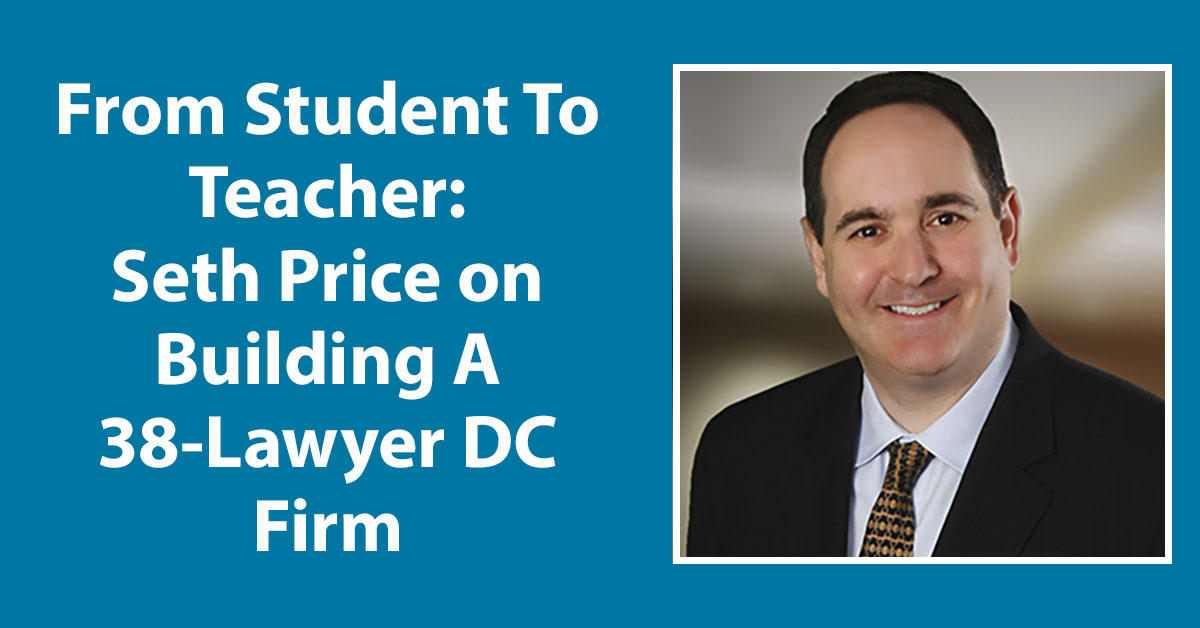 Seth Price is a speaker at our 2019 Super Summit at the Ritz Carleton in the New Orleans French Quarter.  To hear more from him and our other great speakers, just go to www.pilmma.org/supersummit TODAY TO REGISTER.

When attorney Seth Price walked through the conference room doors at the 2018 PILMMA Super Summit in St. Louis, Missouri, it was as one of the Association’s expert speakers for the annual event. Yet when Seth first walked through those doors at the inaugural PILMMA Summit nine years earlier, he was a student who had recently pivoted his criminal law practice into personal injury law.

“It is humbling,” said Seth. “You come in and remember walking through those doors for the first time. You realize that PILMMA opens doors and opportunities that are wonderful. For that, it is definitely something that I do not take for granted and appreciate every time I return.”

The transformation from student to teacher is a remarkable achievement for Seth, which demonstrates the vast growth of his expertise and experience, and incredible scaling of a two-person law firm to 38 attorneys in just a few short years.

So how did it all begin? “In the late ‘90s, I was a founding employee for uslaw.com, a precursor to Avvo,” explained Seth. “We were matching people with lawyers, we had a directory, forms, and chat. But the bubble burst in 2000 and by 2001 it was gone – there was nothing left. So, I had to reinvent myself and start over.”

A few years later Seth met with his friend David Benowitz. David was Seth’s law school fraternity brother who was then practicing as a public defender. In David’s basement, they decided to start a law firm. So, began Price Benowitz, LLP.

Seth and David grew their criminal law practice by focusing on each of their key strengths. Seth dedicated himself to the operations aspects of the practice with his digital marketing expertise. Meanwhile, David focused on the “substance”, as Seth calls it – the delivery of excellent client representation.

“I built a website. It did well. We got an office. We outgrew the office in two weeks. We took our part-time law clerk and made her a full attorney. We built another website, hired another attorney, and so on, until today. Now we are up to 38 lawyers with practice areas from personal injury and medical malpractice, to criminal, to trust and estates, to Qui Tam.”

“We are a unicorn in the sense that we have scaled consumer-facing law with a diversified practice,” says Seth. “There just aren’t that many people doing that.”

Indeed, after Seth and David developed their criminal law practice, they looked towards personal injury law. They began to grow their personal injury practice “with the same concept of merging legal excellence with great marketing.”

Seth attributes their success to three key areas: digital marketing, intake and conversion, and great “substance” – great lawyering. “That trifecta is what I strive for every day,” says Seth.

The growth of Seth and David’s practice also led to the outgrowth of BluShark Digital, a Search Engine Optimization (SEO) company of nearly 50 digital marketing experts and managers. BluShark handles the firm’s online marketing, as well as delivers SEO and website services to more than 75 other law practices in different markets around the country.

In thinking of building the personal injury arm of their firm Seth says, “I knew what I wanted to do. I just didn’t have like-minded people around me to help me get me there.” Then Seth attended his first PILMMA Summit in 2009.

He explains that PILMMA played a huge part in the firm’s success, providing inspiration and a supportive community of like-minded law firm owners.

“Ken was talking about things in a way that I didn’t see anywhere else in the country,” Seth said. “There were other legal organizations but nobody who was A) focusing on injury the way he was, and B) was focused on the business of law. That combination was really exciting.”

“I walked in there and said to myself, ‘Wow! I finally found my people.’”

At PILMMA, “nobody is saying, ‘Don’t use Avvo. You’re going to get penalized by the bar.’ They say, ‘How do I leverage Avvo, this newfound website, to help me succeed? We want to be ethical, but we’re going to push the envelope in every way possible within the ethical bounds.”

To this day, Seth leaves the conference with notes and a list of goals. And in PILMMA’s tenth anniversary year, Seth still gets huge value from the enthusiasm, energy, and desire to succeed that the PILMMA collective offers.

Inspiration and Community with PILMMA

“PILMMA is just a wonderful collective of both knowledge and inspiration,” said Seth. “It gets you out of the office. That alone is valuable. Once there, you can see what’s possible, and you can realize that you’re not alone. Those two things are Ken’s magic and what he has done so well over the years.

PILMMA gives Seth inspiration and reminds him of areas of improvement. “Everybody is speaking the same language. Everybody is motivated in that same direction, to succeed and to help each other achieve.”

Seth still remembers the presentations and conversations that had the greatest impact on him when he first encountered the PILMMA Summit. “I met Gary Christmas, I met Howard Spiva, I heard Richard Harris speak and talked to him at length. I was inspired – not to mention I had about a page-and-a-half of notes that were scribbled down when I got back to my hotel room!”

“PILMMA means access to some of the greatest legal marketing minds out there – and getting time to talk with Ken Hardison,” Seth says.

Looking Toward the Future

Having established Price Benowitz as the go-to law firm in DC in a number of practice areas, Seth is now enjoying the new business goal of growing and establishing BluShark Digital.

He is proud of what he and his practice partner, David, have achieved and in attaining a healthy work-life balance. “I’m very blessed in that I have top deputies in both organizations. I love the balance and the challenge of the two.”

“As much as we’ve expanded, we’ve followed a course of great marketing and great legal prowess. While we have added additional experts to add fuel, it’s the same model. If somebody calls us for an area of law we don’t do, we don’t say, ‘We’ll figure it out.’ We outsource it somewhere else, just like if there is a particular expertise in marketing we don’t do. We don’t pretend to place T.V. ads. We stay in our lane and we do what we do very well.”

As it turns out, PILMMA isn’t only helping Seth make his dreams come true. We also did that for his son, Jake.

Jake has always wanted to go to the Super Bowl. And in 2019, PILMMA and Ken Hardison made it happen for him – and Seth.

Seth was one of the lucky winners in the PILMMA Referral Sweepstakes, announced at the 2018 Super Summit in St. Louis. His prize was an all-expenses-paid trip for two to the 2019 Super Bowl in Atlanta. Watching Seth tell his son that they were going to the Super Bowl – a dream come true – was satisfying all by itself.

Seth and Jake ensured that Ken was represented at the Super Bowl, too. They took with them one of the souvenirs from the 2018 Super Summit – a cardboard fan in the form of Ken’s face!

In closing, Seth has a message to other personal injury lawyers:

“The value with PILMMA is in noticing that other people are having the same struggles on this journey, and seeing what people did to try to get themselves to push two steps forward, once step back.”

“When you see a setback, how do you deal with it?” Seth sees PILMMA as the solution.

“It’s having a group of people, a fraternity to reach out to and say, ‘Hey, how do you deal with this?’ Or, ‘Have you dealt with this before?’”

What does Seth advise? “Get yourself to one of the Super Summits or to one of the boot camps and find out what is out there. The people that you meet and the club that is created and the network that it forms for you is just tremendous.”