The Real Deal: A Conversation On Law Firm Marketing with Ken Hardison 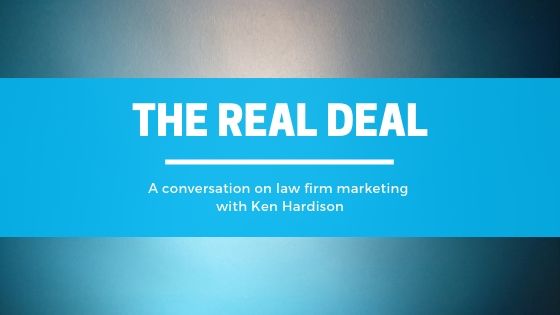 There’s plenty of marketing advice available for lawyers. Some of it is good, and some of it is not so good. So who can you trust? What’s good legal marketing advice? We talked in detail about law firm marketing – real life, real-world situations – with PILMMA founder and marketing pro Ken Hardison when he joined Jake Sanders and Paul Julius on our own LAWsome podcast.

In this interview excerpt, Ken lays out the reality of the clients you aren’t signing, why lawyers need to advertise and how he recommends approaching sales and marketing to those who may be averse to the terms.

Jake Sanders: …So you’ve said that lawyers need to think like a salesman, and I think we’re getting a little bit deeper here from what we originally asked you about. But we’ve had lawyers tell us, “I didn’t go to law school to get into sales.” So can you explain what you mean by that, and why it essential for lawyers to kinda re-approach their marketing with business mindset?

Ken Hardison: Every business is selling something. I didn’t go to law school to be a salesperson either. But there are different types of selling. When people hear selling they think of a used car salesman or somebody putting the pressure on you. Well, that’s not what I’m talking about, but what I’m saying is you need to convey your value to your potential clients.

Here’s the deal. You can be the best lawyer in the world, but if nobody knows about you, they’re not going to hire you, right? I’ve always said that if only bad lawyers advertise then you’re doing a disservice to the consumer because we need some good lawyers to be advertising too. And that was a big deal when I started because the first 12 years of my life practicing law, I did not advertise at all, and just went off my reputation and word of mouth. But things change and you have to change with the times. And you can sit there and say, “Yeah, I’m not going to do it, it’s not professional, that’s not what I want to do,” and you can go broke doing that too.

I think you have a duty to the consumers. If you’re a great lawyer, and you do a good service, they have a right to be able to choose you, but I think you’ve got a moral obligation to put your name out there. And I think, here’s the other thing, you can build the best mousetrap in the world, but if people don’t know about it, they ain’t going to buy it. You can look at it from any way you want to. It doesn’t mean you have to get up there and holler and shout like a used car salesperson, you can do it with educational-based marketing and informing, and get value. And I think you’re doing a service to the public.

I mean, it’s the way you think about it. It’s all about the mindset with lawyers, if you think about it. They all, I mean, they hear the word sales, it’s going to be a negative connotation, and I used to be the same way. But you think about it, instead of saying sales, you say “I got to get my name out there and get people value.” And that makes it a little different.

Jake:  I like the idea of value, just thinking of that as, “How can I bring value above and beyond …” Because you’re here for the transaction, you’re here for that advice, that advisory role, the counsel. We know you can do that, it’s just interesting that marketing feels like it’s ancillary to it, but I like that you say it’s sort of a moral obligation if you’re doing good law to get the word out about it because that helps everybody.

So getting back to that marketing, it’s only one part of the picture. Like once you attract a potential client’s interest, you still have a ways to go before they’re signed up. Marketing-wise, do you think law firms are in general doing it right? Are there any common mistakes that you have seen that stand out? I mean, resting on your laurels is that one, I think people saying, “I’m not going to bend down to do advertising,”.

Jake: What are some other things that people are missing? I love the idea of the before, during, and after because that is such an amazing mindset. You’re talking, if it’s about the “lawyer’s mindset,” that’s a great one because it’s about the time. It’s not about specifically just grabbing for things, marketing isn’t just about advertising, it’s about understanding the bigger client experience. So are there any more tips or any mistakes that you see law firms doing commonly with marketing?

Ken: Oh yeah. Yeah, I go all over the country doing…I do, like, two-day consults and before I get to the firm, I hire this company to do, like, five ghost calls. And they’re people acting as they’ve been in accidents, and I make them call them during the day, during the night, on the weekends, during the day.  And we record them, and it’s funny. I go to law firms, and I mean, like, really good law firms, and I’m talking about people that are spending… I went to this one law firm, they’re spending, like, three to four million dollars a year on advertising and marketing. And they just told me, “We sign up every case we want.” I said, “Okay.” Inevitably, at least two, and most times, three out of the five calls are just terrible. And it’s not that they’re not training them right, but they’re not holding people accountable.

I said, “You probably are signing up all the cases that you talk to, but you’re not talking to every potential client, and there’s just no way that you’re going to.” And so once he heard that, when he got to about the second call, he said, “I got to get up and go to the bathroom, I’m going to throw up.” Because he’s spending three [million]…he knows the deal.

Be sure to listen to the entire podcast episode for more information and conversation about online marketing, advertising advice for lawyers and what you can start doing right now to improve your law firm’s marketing ROI. Be sure to subscribe to LAWsome on your favorite podcast platform, including iTunes, Spotify, Soundcloud and more.

Portions of this interview have been edited for space and continuity Tanner Jones frequently shares his insights on online marketing with the legal community. In addition to serving as a regular speaker at PILMMA and M&L conferences held throughout the country, he has spoken at the Attorney Breakfast Club (Miami-Dade Chapter and Broward County Chapter) and co-hosted webinars with Avvo, LawMarketing.com Editor-in-Chief Cindy Greenway and Raleigh attorney/PILMMA founder Ken Hardison. He also has been featured numerous times in Lawyers Weekly newspapers as well as Attorney at Law Magazine. Tanner is regular contributor to the Consultwebs online legal marketing blog. A native of Waynesville, North Carolina, Tanner earned a degree in Business Management (with a minor in Economics) from Berea College in 2008. He recently moved back to the mountains of North Carolina with his wife, daughter and son and enjoys camping, hiking, fishing, hunting, golfing and playing “any other competitive sport available” in his free time. Learn more about Tanner Jones here. Want more content on law firm marketing? Sign up for the Consultwebs newsletter, follow them on social media, and subscribe to the LAWsome Podcast.